I’m delighted to announce that the winner of the prize for the most correct answers in the Kingussie Quiz is John Johnstone, who is one of our interviewees for the Story of Kingussie Project. Congratulations to John who has won a £50 voucher for any course at the Cairngorms Learning Partnership. Thanks to all who took part and to the CLP for donating the prize.

Now for the answers: The four chimneys are on the Courthouse, W.W stands for former Provost, William Wolfenden who was the owner of the Star Hotel, the figure on top of the Camanachd Cup is John Cameron Dallas, the building with the red door, now Abbeyfield, was once a bank, Boa Vista Road was named by the Count de Serra Largo who built the houses there – It means Beautiful View in Portuguese, the stagecoach used to travel to Fort William, Mr MacGruer lived in New Zealand, the Drill Hall replaced the original Kingussie School, Scot House Hotel was originally a Free Church Manse built by George Ross Mackenzie of the Singer company, in 1957 Pitmain Lodge was blown up, the Provost in the centre of the front row is D.R Morrison, the winning goal was scored by Alastair Borthwick, Alex Falconer captained both Kingussie and Newtonmore, a sports shop replaced the garden, Orchard Court was named after Dr Orchard and the Hermitage was his home, the cross is on the railway station wall, Robert Louis Stevenson stayed in the house now known as Grianach, the Golf Club bazaar was held in 1911, the inscription was funded through the efforts of another former Provost, Alexander ‘Banker’ Macpherson.

It was a tricky quiz – hard to get all of them right – but hopefully those that tried it managed to learn a bit more about Kingussie.

The Story of Kingussie Exhibition was a great success. First, on Friday afternoon the entire Kingussie Primary came to view it, including their own display which looked splendid and spread right round the main hall of Talla nan Ros. At 7pm around eighty people, mainly those who had been involved in the Project or helped in any way, attended the Celebration and Launch. The display boards in the foyer, designed by Rocksolid Designs of Aviemore, looked stunning and were greatly admired. The film, ‘Kingussie Voices’ was enjoyed by everyone, as was the special Story of Kingussie cake. On Saturday the main public Exhibition was well attended despite the dreadful weather, and a great deal of interest was shown in the materials.

Over the coming months the main display will be left up in the foyer, but we also intend to put the material on this website. The film is already on the website through a link to Youtube, but if anyone wishes to buy a hard copy in DVD form call 01540 661569. Also call if you would like to enter the Kingussie Quiz, which has a great prize of a £50 voucher, or if you would like a commemorative medal. 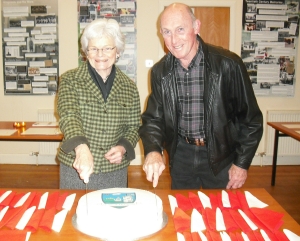 The time for the Story of Kingussie Exhibition is fast approaching. The display boards are completed. Hard work by Kingussie Primary School has resulted in some excellent material which will be displayed along with the main Exhibition. A group in P7 designed a striking logo which is being used on posters and invitations. ‘Kingussie Voices’, a 20 minute film blending voice recordings with old and new photographs, is now completed and will be shown continuously at the Exhibition throughout the day.

The date for the Exhibition is Friday 13th and Saturday 14th December, in Talla nan Ros, Kingussie. On the Friday all of Kingussie Primary will be coming along to view their work along with the main display. On Friday evening at 7pm there will be a Launch and Celebration, to which all helpers are invited. This will be a chance to thank around one hundred people who have been involved in the project. There will be refreshments and a special ‘Story of Kingussie’ cake. On Saturday the Exhibition will be open to the public with free admission from 10am until 4pm.

After the main Exhibition is over the display boards will be left up for the foreseeable future so that as many people as possible will have the chance to view them. There are also plans to put the material, including the film, online, for the benefit of those who live elsewhere or can’t make it along on the 13th or 14th.

It is hoped that there will a good turnout to support a project which has succeeded in engaging many members of the community, ranging from the youngest to the oldest. It is a new type of project for Kingussie and one which, it is hoped, will have lasting significance.

Preparations are now well under way for the Story of Kingussie Exhibition. It will be launched at a celebration party on Friday 13th December in Talla nan Ros, Kingussie. It will then be open to the public throughout the day on Saturday 14th December. Details will be in the local press.

Kingussie Primary School has had a very successful Story of Kingussie project of their own, with a busy programme of guest speakers and visits around the Town. All the pupils have been involved and have produced pieces of work for a competition. Prizes for this will be awarded at a special assembly on 18th November. Their work will be on display in the main exhibition and will then be taken to St Vincent’s Hospital to be shown there. 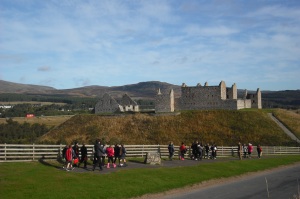 I haven’t put any news in for a while but that doesn’t mean that nothing’s been happening – quite the reverse in fact. Things have been getting pretty hectic as we move from gathering information to the exciting next stage of exhibition planning.

Our volunteers have been busy conducting interviews and adding to our growing archive. They have also been analyzing the material with a view to interpreting it for the exhibition.

The time and place for the exhibition launch has now been set – it’s Talla nan Ros, Kingussie on 6th and 7th December 2013.

We are delighted that Kingussie Primary School are getting involved in the project. The whole school has been doing work on Kingussie history using various approaches. We are running a competition with a prize for each year-group and a display of the pupils’ work at the exhibition launch.

We are building up a collection of photographs for use in the exhibition. Highland Folk Museum have kindly lent us some terrific images. If anyone has pictures of Old Kingussie people or places that we could scan, we would be delighted to hear from you. We are hoping to make a short film consisting of audio clips along with photos so we need to collect plenty of good  and varied images. We are hoping to get Kingussie High School pupils involved in taking modern-day pictures in the Town.

During the summer holiday period the Story of Kingussie project is continuing. We are in a phase of gathering material and information. Our volunteers are recording interviews and we have started building up an archive. Some interviewers have mentioned how much they are learning about Kingussie in the process despite being long-term residents themselves. One of our aims is that everyone should be able to learn something new about our Town no matter how long they have lived here.

On Monday 17th June I attended a meeting of the Kingussie Parish Church 60+ Lunch Club where I gave a short introduction to the project and made a request for photos or other material to be lent for the exhibition. In chatting with individuals I found a few more volunteers who agreed to be interviewed to tell their Kingussie stories.

On Saturday 25th May we held a training session on oral history interviewing and recording. Eleven volunteers attended and the training was carried out by Jill De Fresnes of the Royal Commission on Ancient and Historic Monuments of Scotland (RCAHMS). A big thank you to Jill and to all the volunteers for attending. We are now nearly ready to go out into the community and to start the process of capturing the stories and memories of some of Kingussie’s long term residents. We will finalise a list of potential interviewees and begin to contact them during June. 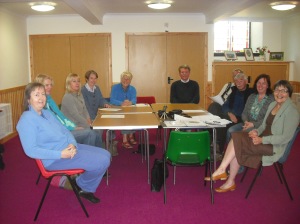 The latest event in Kingussie’s year of festivals on 17th/18th May, the Walkfest, was a big success. It was relevant to the Story of Kingussie project as it featured walks and talks about settlement and land use in the area in past times. I particularly enjoyed David Taylor’s talk on the township that existed at the top of the golf course in the years preceeding the establishment of the planned village of Kingussie. The name Kingussie More was applied to a farm that stretched in a narrow strip right into the hills to the north. Once the village was set up it had far reaching effects on the old agricultural system as sheep farming and shooting came to dominate the rural economy. I will now carry a vivid picture in my head of past times as I walk on the golf course. 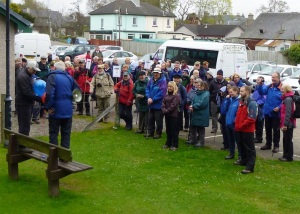 The oral history training will take place in the church hall, Kingussie Parish Church at 10am on Saturday 25th May. Jill De Fresnes from RCAHMS will lead a theory session first, followed by a chance to practice in pairs. We hope to finish by 1pm. We are currently finalising a list of hopefully ten interviewers to take part. Get in touch soon if you’d like to take part. We are also planning to purchase some recording equipment prior to the training. After the 25th we will decide on a programme of interviews to be carried out mainly during June.